Guide to Iron Marines, a casual RTS sci-fi game made by Ironhide Game Studios, available on Android, iOS and Steam.

When the going gets tough, the tough call the IRON MARINES! An elite force trained and equipped to deal with the galaxy´s hardest adversities! Get in command of the meanest, baddest, silliest military-force in the entire universe! Command a powerful army of fearless, trigger happy: soldiers, mechas and aliens across dangerous missions throughout the galaxy, spreading might and fear to any enemy who dare stand in their way! Tons of constructions at your disposal: Laser Turrets, Machine Guns, Missile Silos, Shield Generators, Radars, and more! Plus a Tech tree of over 50 UPGRADES for your units and bases! 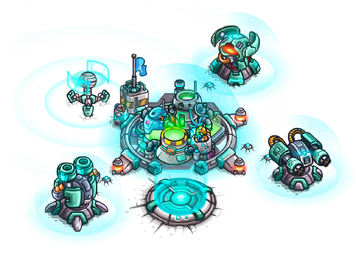 Retrieved from "https://iron-marines.fandom.com/wiki/Iron_Marines_Wikia?oldid=1567"
Community content is available under CC-BY-SA unless otherwise noted.